Coroner Inquest into the murders of Stephen Port postponed

The judge-led coroner inquest into the murders of Stephen Port was scheduled to start on Jan 7 at Barking Town Hall. This has been postponed at the last minute due to the escalation of the Covid emergency. We should have more information to share in the last week of January.

UPDATE (21 Jan): The inquest has been re-listed for Oct-Nov 2021 by the coroner. This was due to concern about the ability to hold an inquest for eight weeks during the Covid pandemic and also the availability of the legal representatives of all the interested parties.

Stephen Port was convicted of the murders of Anthony Walgate, Gabriel Kovari, Daniel Whitworth and Jack Taylor between June 2014 and September 2015.
These four young men aged between 22 and 25 years old died in Barking and Dagenham after being poisoned by Stephen Port with the chemsex drug GHB.

In November 2016, following a trial at the Old Bailey, Stephen Port was convicted of murdering all four men. He was also found guilty of sexually assaulting a number of other young men. He was sentenced to life imprisonment with a whole life order.

There has been serious concern about the late linkage of the four murders.
Following this trial, the coroner's office appointed judge Sarah Munro QC to conduct a fresh inquest into all four deaths.

This is separate from the Independent Office for Police Conduct (IOPC) investigation into the handling of these deaths by the Metropolitan Police (MPS)
Although a draft report has been received by the MPS, the final IOPC report has not published. (The LGBT+ Advisory Group has not seen this report.) The coroner's inquest has included the IOPC findings as evidence and so any publication will be delayed until at least the conclusion of the inquest.

The LGBT+ Advisory Group has been working with the MPS to identify learnings from this tragic case.  Among this work is a review of 58 cases of GHB-related deaths. The report with detailed recommendations was published in December 2020. (See our separate news item.)

Posted by LGBT Advisory Group at 04:49 No comments:

Email ThisBlogThis!Share to TwitterShare to FacebookShare to Pinterest
Labels: news


We share a monthly summary of homophobic (HO) and transphobic (HT) crime reports in London. These are figures for incidents and offences reported to the Metropolitan Police. Also included is the sanction detection rate (SD) for these reported cases. 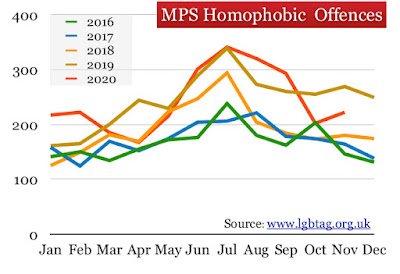 A time series for HT figures will be produced when we have more data.
It should be stressed that here is evidence that there is significantly under-reporting of hate crimes. We are working to increase the number of reported crimes shown in these statistics by working with the police to increase public confidence in reporting.

The Mayor's Office for Policing and Crime (MOPAC) publishes statistics on all hate crimes in London on their Hate Crime Dashboard.

2020
The year started off with an elevated number of homophobic hate crimes. The COVID19 lockdown has reduced the number of reports. This has now risen back to pre-COVID levels.

LGBT Advisory Group
London, United Kingdom
We are a voluntary group of independent lesbian, gay, bisexual and transgender (LGBT) advisors working with the Metropolitan Police Service. We advise on and monitor police issues that affect LGBT people who live in, work in, study in or are visiting London.