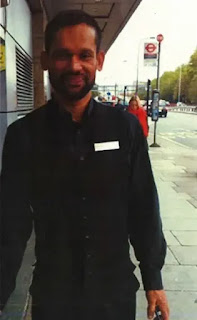 We are assisting the MPS in the murder of Ranjith Kankanamalage (also known as Roy) in Tower Hamlets Park Cemetery.  We are making sure that LGBT+ issues are addressed in the investigation of this tragic death. We are also advising on the wider police response regarding safety in Tower Hamlets and the whole of London.
The police is treating this as a homophobic attack but remains open to other lines of inquiry.
A man arrested on Friday 20th remains under investigation. The police has released an image of the victim and is urgently appealing for witnesses.

Ranjith's body was found in the cemetery on the morning of August 16. The post mortem on Thursday concluded that the victim suffered blunt force trauma to the head.  The park remains closed for forensic investigation of the crime scene.

If you have any information, please contact the police, Crimestoppers or Galop. The investigation team is clear that they are only interested in information relevant to the case  and are not interested in any other activity in the park. The privacy of anyone coming forward with information will be respected.
You can:
Call the Incident Room direct on 0208 345 3865
Call 101, or Tweet @MetCC quoting 1277/16.
Follow link: https://mipp.police.uk/operation/01MPS21S81-PO1.
Use Crimestoppers anonymously: 0800 555 111.
Contact the LGBT+ charity Galop for third-party confidential reporting
See also the MPS press release.

Posted by LGBT Advisory Group at 13:06

Email ThisBlogThis!Share to TwitterShare to FacebookShare to Pinterest
Labels: news